The Social Conscience of Memory 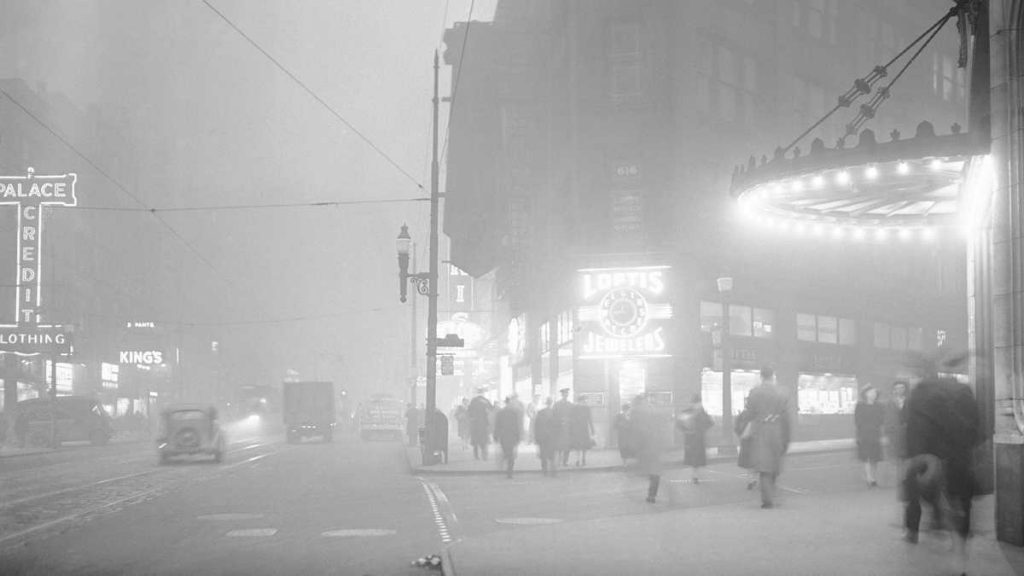 Noon air in Pittsburgh during the mid-40’s at the height of steel production, photographer unknown

For those of us who were alive before the 70’s, we must remember. And in doing so, poignantly remind others, speak out tirelessly about our experience of the scarred earth that is forever blazed in our minds and likely still lodged in our bodies, and advocate strongly for mother earth to anyone who will listen — our elected representatives, corporate leaders, and the masses enamored with consumer pleasures.

When I was young, I grew up in Akron Ohio—part of the industrial heartland. Nixon country then, Trumplandia today. My parents were from McKeesport, near Pittsburgh, and both sets of my grandparents had modest homes there, an alley apart. My grandfathers worked for the coal burning steel mills and heated their homes with coal burning furnaces. My brothers and I found great delight in playing in the coal cellars, emerging black with coal residue on our skin and clothes. Western PA and Eastern Ohio were home to the great American steel mills. Akron was the rubber capital where Firestone, Goodyear, and Goodrich had their rubber and tire manufacturing plants.

Often in Akron, we would wake up to the pungent smell of rubber infusing the air, and irritating the lungs and throat. When I was no older than twenty-one (and I was a competitive swimmer),  a routine chest X-ray revealed the beginning of scar tissue in my lungs and the doctor advised moving away from the Midwest in search of cleaner air. The Cuyahoga river in Cleveland caught fire from chemical pollutants. Lake Erie had fish with open tumors and sores on their gills. Our science textbooks in college taught us that the last truly virgin, clean air in America disappeared over Colorado in 1968. 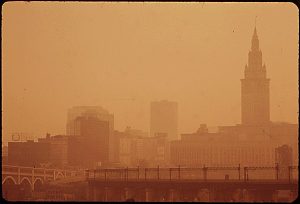 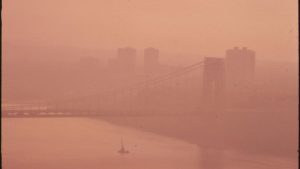 New Jersey to Chicago was an industrial toilet. The air in Pittsburgh reminded me of the extreme pollution of Chinese cities today. Homes were filthy; the air was so dirty that houses and buildings were stained a permanent brown, with an 1/8 inch of fine dirt covering all surfaces, always. Blowing your nose from the constant irritation left brown stains on the handkerchief. My brothers and I were so ignorant about this “normalized” condition that that we would laugh devilishly about the thick, black mucus.

Do you remember flying into cities? After winging over open ocean or the great plains, once we would fly several hundred miles near a city, the air would start becoming hazy and tannish-brown. When I was growing up, sometimes sunsets were non-existent, completely obscured by the haze and filth. When we did see the sunsets, they were exquisitely beautiful for all the wrong reasons—orange and flaming as the fading light was filtered through the airy mass of particulate pollutants. To this day, I find sunset photographs to be a subversive reminder of how sublime beauty is often found in the most paradoxical conditions—and we must look beyond the beauty and not be fooled.

Before 1970, brown was the color of the air, not the earth. As children, we took this as a matter of course. All the while, the adults were gravely worried. The environment belonged to everyone and was not a partisan issue back then. Successive administrations, Democrats and Republicans, beginning in the Kennedy era in 1963, fought and clawed to insure our survival and the health of the planet. The Clean Air act was passed in 1963 and significantly amended in 1970, 1977, and 1990. The EPA (Environmental Protection Agency) was established in 1970, under President Nixon. Under the first Bush Presidency, EPA Administrator, William K. Reilly named the Clean Air Act of 1990 as his most important accomplishment. We must look beyond politics and continue their work.

The planet is not, and cannot be, a partisan or even just a national issue. Otherwise the earth is doomed, as are we.

How can we help? We must look deep within. Each of us has skill sets and personal and professional talents that can and must be placed in the service of our living earth. I kick myself with the guilt of wisdom looking backwards at having powerful tools — a camera and a pen — and never once thinking of documenting the overwhelmingly filthy air and water of my home—the effects of rubber, steel, and hard industry of the heartland. And, in my youth, I could not yet make the connection between the “good life” of post-war America and its growing rampant consumerism with humanistic and environmental values that honored the mother of our existence, the earth, and our profound interdependence with nature and each other. We are all one, but rarely have the consciousness to know this experientially within ourselves. Perhaps if we really knew the unity of life, our actions would become more responsible, more humane, and less prone to upsetting natural and planetary balances.

The man I will call a great scholar of the earth, Thomas Berry, sees the universe as a “communion of subjects, not a collection of objects.” As a photographer, there are times when I experience rare moments of seeing the world as an indivisible whole of which I am a part and can know my place, not through intellect but through a mysterious process of seeing and recognizing the beating heart of the world. Berry exclaims that now, “We no longer read the book of the universe.” He explains a truth most sensitive people cannot completely resign themselves to. “We achieved extensive control over the mechanistic and even the biological functioning of the natural world, but this control itself has produced deadly consequences. We have not only controlled the planet in much of its basic functioning; we have, to an extensive degree, extinguished the life systems themselves. We have silenced so many of those wonderful voices of the universe that once spoke to us of the grand mysteries of existence.”

The territory of personal identity and individual desire pales in the light of consciousness. When we strive to view the world with respect and awareness, the springs of consciousness flow through the act of seeing. We cannot help but be touched by seeing what is. The earth demands that we relinquish the illusion of separateness. We must cut across all boundaries that separate us, put our differences aside, and come together as one people of one world. Use your powers in whatever life domain you excel to help heal the planet. Make sacrifices. Take responsibility. Don’t let this moment pass without action as I did in my youth. Let’s not look back from a dystopian future and realize what we have and what we could have done now, today, in this moment. Remember the past, witness the present, and endeavor to make a difference for future generations on a healthy, habitable earth.

Bill Mckibben, ardent environmentalist, writes in the New York Times this week about Trump’s current initiatives in dismantling current environmental policy: “The effects will be felt not immediately but over decades and centuries and millenniums. More ice will melt, and that will cut the planet’s reflectivity, amplifying the warming; more permafrost will thaw, and that will push more methane into the atmosphere, trapping yet more heat. The species that go extinct as a result of the warming won’t mostly die in the next four years, but they will die. The nations that will be submerged won’t sink beneath the waves on his watch, but they will sink. No president will be able to claw back this time — crucial time, since we’re right now breaking the back of the climate system.”

I stand steadfast with the hundreds of thousands today who made themselves heard in support of facts and responsible global policy in the worldwide March for Science.