"I Am Loving Awareness"

Laura and David with Ram Dass, at his home on Maui

Last Saturday, we had the opportunity to visit and interview Ram Dass at his home amidst the exceptional natural beauty of Maui. To say that we were deeply moved and touched to our core would be an understatement. There are no words that can accurately reflect having darshan with a genuine spiritual teacher, a highly public explorer of consciousness since the early 1960’s. Without a doubt, Ram Dass exemplifies and embodies the qualities of being that many of us seek and hope to find: peace, love, compassion, inner expansion, and joy. Quite simply, he radiates a luminosity and clarity that we have only experienced in contact with rare individuals who have traversed the inner path with grace, diligence, and heart.

Our first meeting was nothing short of warm and encompassing. We drove down the long road toward his house in the Maui country silently collecting our thoughts after weeks of reading and rereading his books in preparation for David’s interview. After being invited into the house by his assistants, we heard his voice calling a warm “hello!” from the next room. We turned to see this joyous, light-giving older man smiling broadly toward us and waving his hand.

What was immediately special about Ram Dass was that the whole scene around him was particularly not special. He was just as he was, but that ironically is so very special.  You could see in his presence that the words “Be Here Now” were not merely a New Age cliché. He was right there with us from the start. 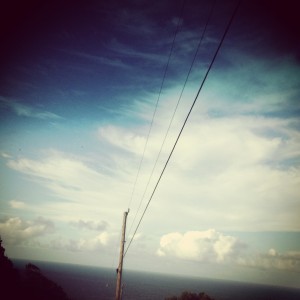 On the way to visit Ram Dass © Laura Dunn

When we got settled in the living room, Ram Dass just looked at us and there was an expansive space that we walked into. It felt completely natural to stop and gaze at one other. We weren’t doing anything other than simply being there.

From what we saw, the whole house is a puja. Images of his guru, Maharaj-ji are everywhere—on the walls, statues on the floors, on the tables, and in the corners. It’s like they say in yoga, “everything is God”.

Ram Dass was extremely articulate and well-spoken for someone who suffered a severe stroke. He was very attentive, and he was particularly present for the interview. He really listened to the questions, but more than listening, he was very perceptive of everything. He was taking in all of what was being asked and what was being said. It was actually quite amazing. He answered questions on one level – answering with words to verbal questions, but also responding to impressions in another way. If metacommunication accounts for 75% of our communication, then Ram Dass was very tuned in. If David wiped his eye, or Laura shifted position, Ram Dass stopped and observed and responded to that as well as to the questions. At certain points, we noticed that David’s response to an answer shifted how Ram Dass continued to respond. He was very good with the nuances and diversity of human communication.

Many times in the interview, he gestured from the head to the heart—indicating our path that we need to travel, from the ego to the soul.  Yet identification with the self—with imagined states, with our mental churning, with our ideas about ourselves, and our constant looking toward the past and the future—seems endless. How to . . .  how to . . . .? Was the question uppermost on our minds

Throughout most of the interview, what we felt was as important as what he said. He seemed to speak directly to the heart and not merely to and from the mind.

We have just begun to transcribe the interview, but Ram Dass was able to distill his teaching into powerful short words and phrases, such as those we are including here:

“The soul is not part of the incarnation. It comes into the incarnation.  And the soul is not afraid of death because it has done it so many times. The ego is individual, and the world at this moment is ruled by nations which  are egos. And I think, for example, that the current United Nations is very ineffective. But then what would we substitute? We could substitute wise beings from different religions or different states. Philosopher kings, if you will.”

“When I was a psychologist, this (points to head) was my preeminent instrument. This was what I thought I was. And when I went here (into the chest), I said, I’m home. Because it was so familiar and yet it was something I had not really experienced. None of my psychology got down to here (the heart) before mushrooms and my guru—those were the two major things.”

Now when I want to get rid of a thought, what happens? Because they feed on negative energy, I don’t just say or think, go away. I usually love them; I love the negative thoughts. Just love them. I love them all. I love everything. I even love the wall!”

“If we are all down here (heart), one, then we would finish with the kali yuga, We’d have a new life, a new era. And I realize that when I am talking to an audience, they are all egos and they are all souls, and by my mirroring their souls, that lecture then can get them to an identification with the soul. And then if the audience comes together in the right way, you and you and you and you, they will experience love for each other.”

“The ego is a tool. You don’t separate it. It’s a tool for the spirit.”

“He (Maharaj-ji) is with me all the time of my life. I feel his presence… He inhabits my imagination. I imagine we talk. It’s like talking to Buddha or Jesus. Having that perception in my life is brilliant—because my ego doesn’t have a chance.”

After taking our leave of Ram Dass, we were high, intoxicated with his loving presence. Yet, basking in the light and inner fire of a master does not alone lead to enlightenment. What contact with Ram Dass engendered was an increased commitment to our own inner work, a heightened sense of our wish and our feeling of a need to awaken, to become more inwardly alive and conscious, inclusive of the heart, head and body. Contact with a semi-realized being, one that has not shirked from the challenges of the inner path, that has traversed the Way with dignity and an unshakable commitment, helps us by exemplifying and demonstrating what is possible for us.

David has interviewed a number of remarkable individuals for the book he is working on with the draft title of Gathering Together: Conversations on Collective Wisdom, yet both of us were visibly humbled in front of Ram Dass. We found ourselves moving closer and closer to him, moving to the edge of the couch—like moths attracted to the inner flame. We were both truly moved and touched by his presence—the presence of one who has dedicated himself to a life of inner work, a life of service, and a life of loving devotion, or bhakti. He opened up our dialogue by reminding us of the mantra, “I am loving awareness.” His openness and level of being embodied the words he spoke. So, we listened and over the next few days attempted to put those words into practice as he advised.

“I am loving awareness”

As we approached and engaged our own inner work, what was most striking of our practice with the internal repetition of the mantra was how much we are not loving awareness, or how much we are not in accord with that deep well of true feeling. Practicing yoga or sitting daily, one believes that those words would flow more easily, ring truer. Yet, the words “I am loving awareness” pointed again and again to the long-term aim of practice, indicating that indeed we are not yet there. Such a mantra illuminates where we still need to work, how the ego often appropriates spiritual practices for its own survival. We see how most every striving in our practice is rooted in egotism—wanting to better than, more than, rejecting the moment, and attached to the outcome. So little of our practice is rooted in patience, observation, self-acceptance, compassion, peace, and joy.

As the days passed, we wondered that if this is how we are with ourselves, then how must we be in community with others? If we are closed off to the essence of who we really are, how can we truly be in communion with those around us—our friends, and families, animals and the living planet itself? In the arrow of a practice that points to the heart we are reminded again of our initial impressions, of intuitively seeing all that we are and all that we are not. What does it mean to practice and strive rightly, and what does it mean to humble the ego in the service of spirit as Ram Dass suggests? In moments of pure seeing, what we often see is our fragmentation and disconnection from the heart and the real mind. What Ram Dass generously offers is a view from farther up the mountain, where our spiritual practice points beyond our own disconnection toward something pure, whole and complete.

“When I look at souls flower, it’s like a field—it’s beautiful, quite beautiful. And I am helping that flowering as my path to God, like him (points to a large statue of Hanuman, the monkey deity).”

His message to the world is so important, so essential to our collective well-being and the health of the planet. “Go inside. The outside is seductive. Inside, you’ll find loving awareness.”

Ram Dass first went to India in 1967. He was still Dr. Richard Alpert, an already eminent Harvard psychologist and psychedelic pioneer with Dr.Timothy Leary. He had continued his psychedelic research until that fateful Eastern trip in 1967, when he traveled to India. In India, he met his guru, Neem Karoli Baba, affectionately known as Maharajji, who gave Ram Dass his name, which means “servant of God.” Everything changed then – his intense dharmic life started, and he became a pivotal influence on a culture that has reverberated with the words “Be Here Now” ever since. Ram Dass’s spirit has been a guiding light for three generations, carrying along millions on the journey, helping free them from their bonds as he has worked his way through his own.
—www.ramdass.org