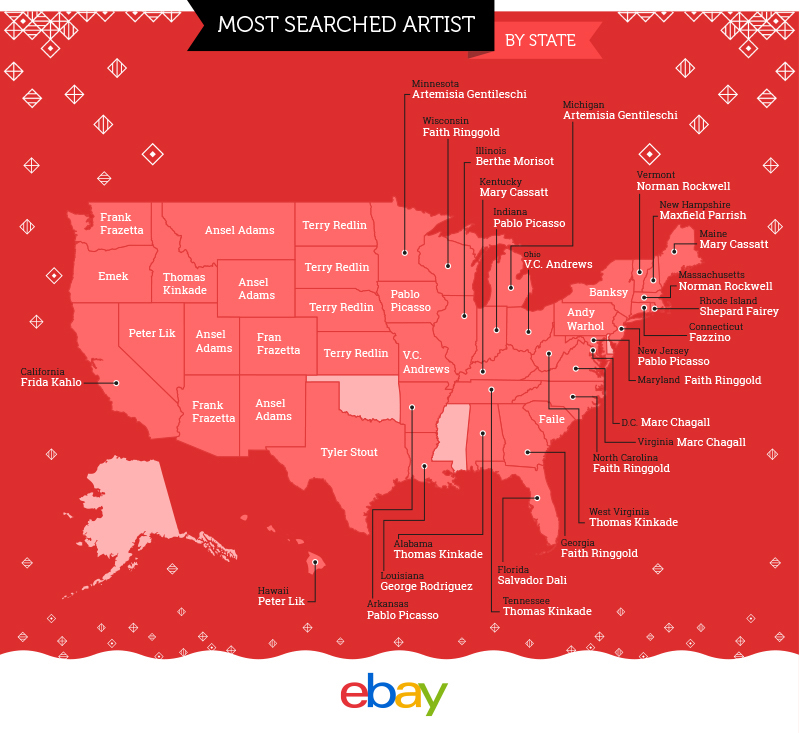 The arts reflect the soul of a people; they express the spirit of an age. If this is true, and historically all evidence affirms this, then what can we deduce from this graphic? The diagram shows the most prevalent search for artists on eBay by state. Since eBay is a commerce site, we can safely assume that at least some of these searches were made with the intention of buying art. But people buy what they value. And what does the value system implied here tell us?

Approximately half of the states have as their most-searched artists people who are well outside the mainstream of acknowledged art history. They produce work that is either overly idealistic and sentimental (Terrr Redlin, Thomas Kinkade) or admittedly good sci-fi fantasy comic book illustrations (Frank Frazetta), Tyler Stout) or they are aggressive sales-based artists for whom art is largely a commodity, such as Peter Lik (Nevada, Hawaii), who recently sold a photograph for the highest price ever paid for a lens-base image (6.5 million.) Other states have their favorite sons or daughters such as Andy Warhol who was born in Pennsylvania, and Norman Rockwell for two New England states (Massachusetts and Vermont), or Faith Ringold, African-American painter and quiltmaker (North Carolina and Georgia.)

Only a handful of states (14 or 15) have chosen artists who are acknowledged masters within the art world. Four western states chose photographer Ansel Adams, which makes sense given his landscape-based environmentally conscious art, and four midwestern or eastern states chose Pablo Picasso, with two cosmopolitan eastern states (Washington and Virginia) choosing Marc Chagall.

The single most surprising result was from Minnesota and Michigan, who selected Artemisia Gentileschi, the Italian Baroque painter of the 16th and 17th century — and the first woman painter to become part of the academy. She was a highly accomplished artist and an inspiration for today’s feminism. What an unexpected and delightful choice. Can you buy her work on eBay? I doubt it.

W.C Fields once said something to this effect: “You cannot go wrong underestimating the taste of the American public.” This graphic raises so many questions about the condition of our culture. Have we lost access to the intelligence of the senses? Have we become so inured with stimulation and titillation from media that we can no longer respond to and respect the profound expressive subtleties in works of art? Is the language of art designed for sentiment or superficial fantasies? Can art not reach towards something higher? A purpose that serves human beings through an expressive language that touches inner realities or attends to, in the words of James Agee, “the cruel radiance of what is.”

As an artist, I have experienced first-hand two recurring conditions. I have noticed repeatedly that the least interesting (to me) and most merely pictorial images are the ones that sell to the public. I have sold at least a dozen prints of Tulips, Cape Cod, MA 1981, an image that is superficially beautiful, but lacking in deeper accessible content. I made the image the week after my father’s sudden death and discovered an unexpected response to the event: in the midst of my sorrow, I found a paradoxical condition, the openness of a new beginning in my life. I felt the need to stand in the shoes that were once occupied by my father and my teachers. The second condition that I find mostly in art schools is the prevalence of conceptually-base art that ignores the language of emotions in favor of a stringent mind-based expression. Even craftsmanship can be side-tracked as some artists believe it is a form of fetishization to deeply love the language of paint, or silicon, or perfect words carefully drafted on the page. In traditional societies, the craftsperson worked with his or her head, hand, and heart, not ignoring any one and seeking a tenuous, living balance between them.

In recent years I have observed in teaching both college-age students and adults that they have lost the ability (or perhaps it has gone underground) to feel into a work of art or to fully empathize with a photographic subject in the world. They think about the scene or the work, seek to analyze its formal or technical qualities, and remain in a highly subjective viewpoint dominated by like and dislike—the most superficial of emotional reactions. In contemporary American culture we have seen with sharp clarity the dangers and limitations of viewing the entire world based on one’s partisan opinions, like, and dislikes.  I have therefore come to a new aim in my teaching: paying attention to the whole person and not just focusing on the development of a critical intelligence or the acquisition of technical skill and expertise. I see the acute need for this in myself and I strongly believe my students crave this attention to their underlying potential wholeness.

The capacity to create is one of our most human characteristics and calls upon the full range of our potentialities: the search for authenticity, what grows from our most unique sense of identity, the need to think and feel simultaneously, deep perception, and the possibility of listening to the often-hidden call of intuition and our innate intelligence.

What might art look like that reflects the whole force of the human being: the clarity and rigor of the mind, the wisdom of feeling, and the awakened receptivity and knowing of the senses? And what might a culture look like that valued the whole development of the human being and not just focus on the mind, which is the great poverty, in my estimation, of our current educational system? Poet Theodore Roethke so poignantly writes: “The death of feeling in a child, what could be more terrible?”