Crossroads of Heaven and Earth on Mauna Kea 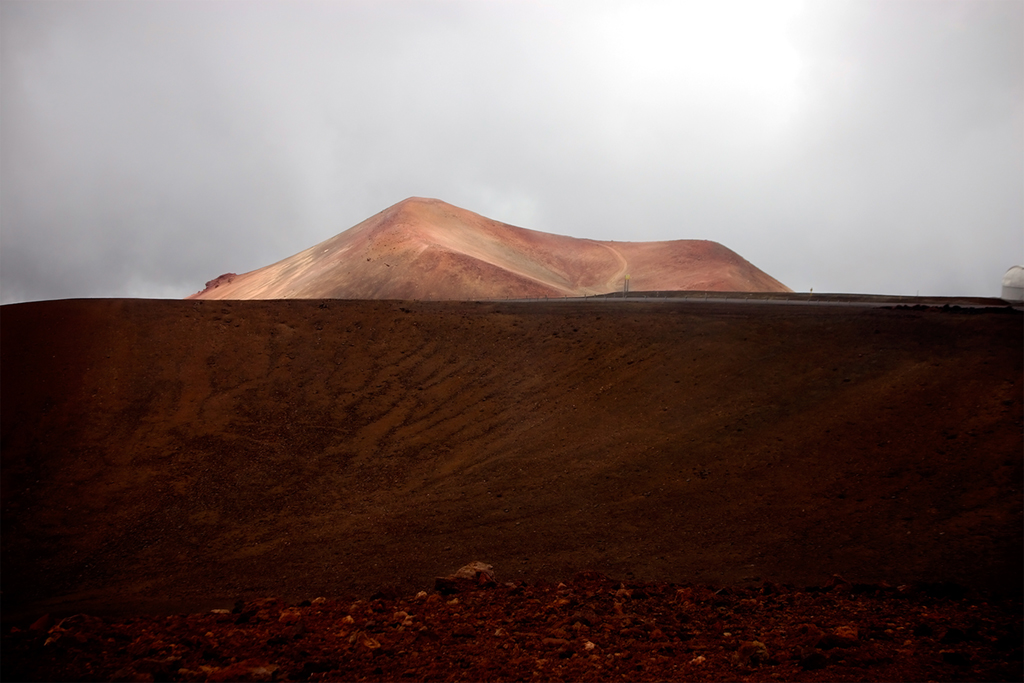 Among the many roles that artists can play is to bring perspective, create an enlarged viewpoint, and to offer their wisdom through carefully crafted objects invested with feeling and thought. By thought, I mean the intelligence that grows from one’s entire being, formulated in thinking that is capable of transcending literal and rational description.

Several years ago, I worked on a small project of images from the top of Mauna Kea, the Big Island peak which is home to a fragile ecosystem, endangered species, and 13 large telescopes managed by a consortium of astronomers from different countries. Due to the height (14,000 feet) and the lack of light pollution, Mauna Kea is one of the two places on the globe (the other is in Chilé) ideal for viewing and mapping the heavens. Mauna Kea is also a hallowed ground for Native Hawaiians who understand the sacred peak as the center of their cultural universe. Currently, a new and extremely large (30 meter) telescope is to be built on land leased to the University of Hawai‘i. It has gone through the permitting process with construction meant to initiate immediately. A massive protest among Native Hawaiians— one that has reached national proportions—has currently caused an indefinite delay in the construction.

When I first arrived at the summit of Mauna Kea, I was not prepared for its penetrating impression on my being. I was captivated. Awestruck would not be an exaggeration. The energy and mana (spiritual power) is palpable and real. I felt it in my gut and in my bones. The mountain has charisma. My mother, as a young woman, once went on a date with John F. Kennedy. She said his charisma was enough to “knock you over.” Mauna Kea has that kind of intensity for those privileged enough to spend time in the cradle of its peak. There were moments on the summit of Mauna Kea where I felt the mountain was speaking, making its presence known through my heart and my camera. It gave a generous harvest of images. “That gift was for us,” my companion and I remarked on the summit of the highest mountain in Hawai‘i—as the clouds cleared and the light danced between starkly beautiful volcanic forms. It was nothing less than a form of magic, the mysterious voices of an ancient land. 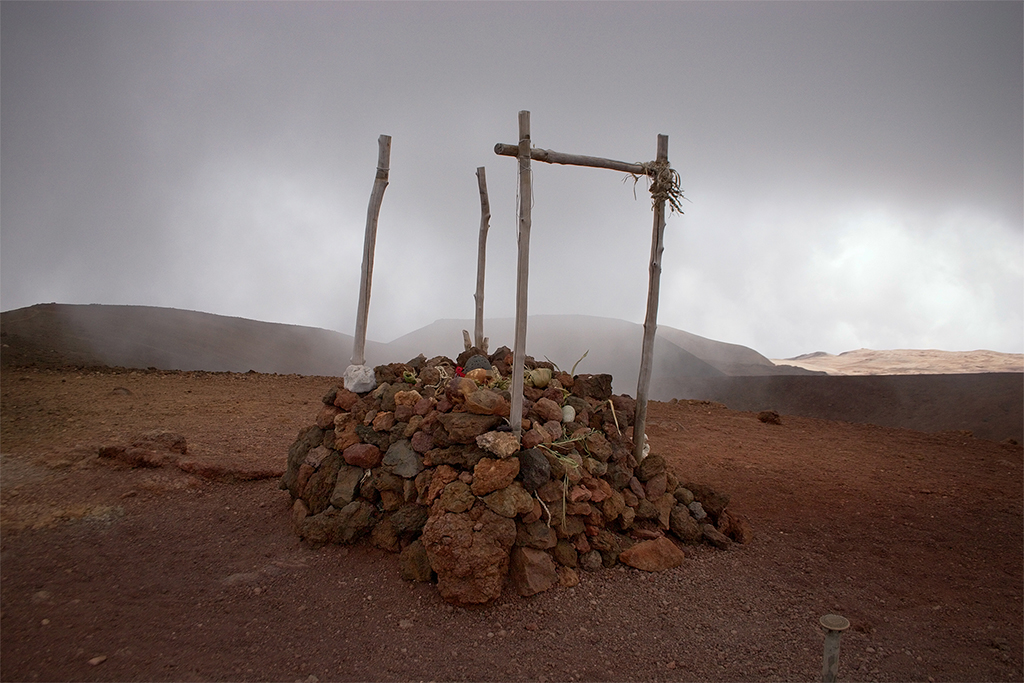 In thirty-five years of photographing in Hawai‘i, I’ve tried to evoke awareness of the changes that western economic attitudes have brought to the living culture of Hawai‘i and to this fragile ecosystem of land in the middle of the Pacific. I feel a strong need to honor and respect the distinctly Hawaiian view of the land with the guiding beacon of Aloha ‘Aina (love of the land). This special sense of relationship with the land is a pervasive, guiding value at every level of Hawaiian culture. For westerners, since the age of enlightenment, rationality took hold as the guiding light of our worldview, where the land is seen as an inert, passive entity to be used and exploited, often for economic gain. How do we reconcile these differing worldviews? Can we? If a compromise position cannot be found, can we at least respect and honor other points of view, leaving a wide berth of tolerance especially for the beliefs of the indigenous people of a place that we colonized?

I went to the summit of Mauna Kea to teach Adobe Photoshop to the scientists and astronomers who attached cameras to telescopes to capture and analyze light from distant stars and galaxies that originated many light years ago. What I found among those explorers of the heavens was an unflinching high-mindedeness, a deep commitment to advancing human knowledge about the very edges of our perceived universe. What I realized, of course, is that for the astronomers and scientists, knowledge is sacred. The quest for discovery and exploration ensues with a religious-like fervor, not unlike the fiery passion of an artist deeply engaged in the creative process. Indeed, the largest telescope currently on the summit, Keck Observatory, has a spired, domed ceiling and light reminiscent of a cathedral. To liken the interior of a telescope and feel the presence of something subtle and mysterious in a scientific structure was not something I expected. 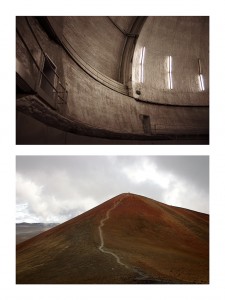 One of the most powerful comments I have heard about the conflict atop Mauna Kea came recently from a Native Hawaiian artist who reminded us: “we are missing one voice in this dialogue. The mountain needs to speak.” Yes, I thought, the mountain, the place where heaven and earth meet, must inform our actions. This goes beyond the rational into the realm of shamans, medicine men — and artists touched by the fire of the creative process. In his excellent book, On Dialogue, physicist and explorer of consciousness David Bohm writes of the potential for human dialogue, often between deeply conflicting agendas, in finding fresh and unanticipated solutions in the moment when people truly open to each other. In this form of creative dialogue, everyone is or can be an artist engaged in the creative process of giving birth to something new, not considered or anticipated prior to coming together in a shared space of exploration. Something is “in the air,” and descends into the assembled minds through a particular kind of open dialogue that incorporates thought, feeling, and sensation, or what David Bohm calls the proprioception of thought or how thought interacts in our bodies.

There is much more to know in the universe, both spiritually and scientifically. We can explore as artists and we can discover as scientists.

As a human being, I have always been drawn to the land and have wanted to unravel its layered meaning. In the woods of my youth, my brothers and I frequently found evidence of the history of the land in the form of arrowheads and stone trail-markers. These were our discoveries, in the moment, of an earlier, indigenous presence. They brought the land to life, gave meaning and continuity to our existence, and charged the landscape with story and legend. The land remembers. The land is a witness. This human meaning embedded in the ground gave rise to my passion for the camera’s power to bear witness. 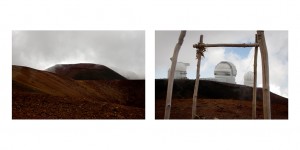 As an artist, I am interested in paradox, that images can hold opposing energies, conflicting meanings within their bounds. Somehow, dual forces can be reconciled through art. According to Webster, paradox means: “A statement or proposition that seems self contradictory or absurd but in reality expresses a possible truth.” In other words, we can find truth in the vital tension inherent within opposites.

An image can arise from a deeper part of the mind, where contradiction may reveal a “possible truth.” Often, my images contain the great ugliness yet haunting beauty of, for example, bombs on Kahoolawe or petroglyphs surrounded by a modern golf course, or unrestrained development on the lands that hold our ancestral memories. Beauty and truth often reside in the broader perspective, ignoring nothing, embracing all, yet in standing for what we believe. David Bohm writes: “True unity in the individual and between man and nature, as well as between man and man, can arise only in a form of action that does not attempt to fragment the whole of reality.”

My artistic goals goals center around highlighting the paradoxes inherent in land use in Hawai‘i: the intense beauty of these isolated lands contrasted with insensitive economic development; the cultural richness of the Hawaiian landscape compared to a sea of homogenous high-rise condominiums and resorts; and indigenous rights against a democratic society with benefits for all people. There are no easy answers to the disposition of ancestral lands. Moral and ethical rights often counter legal rights, and Hawaiian values often oppose western assumptions.

Land use in Hawai‘i can be seen as a microcosm that typifies the struggle for indigenous rights on the planet and serves as a symbol for the rights of the earth worldwide. The forces of modernization and economic progress often pillage the earth and exenterate the soul of native traditions and spiritual values. I would wish that my work as an artist could help us on the path towards finding a sustainable future for the earth and for sensitive land use and respect for all cultures and peoples. 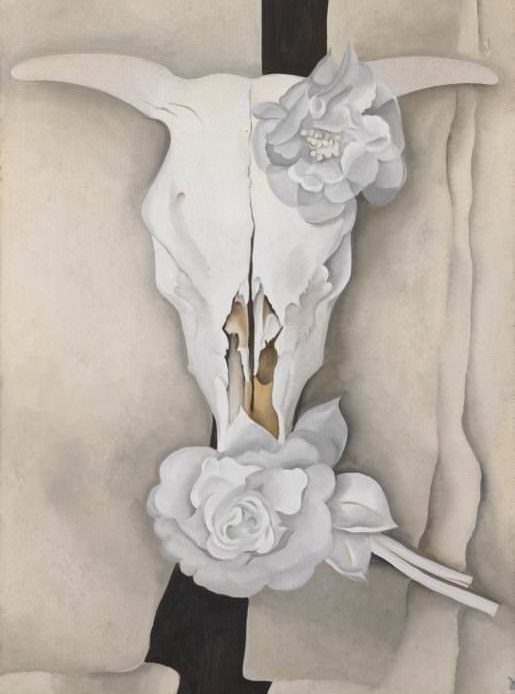 During a poignant recollection of the Cuban Missile Crisis in 1962, Under Secretary of State George W. Ball noted a “a particularly macabre background” upon which decisions were made that nearly brought us, and then lifted us, from the brink of war between the United States and Russia. He was referring to the weather. “Though we might be about to blow up the world, nature had never seemed so luxuriant,” Ball recalled. “The air was light and the sky crystal clear. As he walked through the White House Rose Garden at the resolution of the crisis, he remarked to [Secretary of Defense] Rober McNamara, ‘Do you remember the Georgia O’Keeffe painting of a rose blooming through an ox skull? That’s exactly how I feel this morning.’” This painting had occupied his mind, as a symbol, during the legendary 13 days at midcentury in which we had stopped just short of the edge of insanity of a thermonuclear war between the world’s superpowers.

A rose blooming through a skull and life contained in death, the yin/yang of existence can be found powerfully expressed in art, poetry, literature and music. The depths of the mind, the unconscious and the collective consciousness, can make its way to the surface through the struggles and opportunities inherent in the creative process. We can become the voice of an age, the mouthpiece of a generation, or a living expression of the collective forces found in the earth, the land itself. Hawaiians believe that art and inspiration can come, in part, from the voices of the ancestors that live within us. Others believe that the muses arise from those forces or energies that pass between us as human beings, while others assert the art can arise from deep within the unconscious — or all of the above.

Art can hold something larger, a greater perspective, than our usual opinion-based or partisan thought. It can lead us to consciousness, if we are willing to undertake the journey.

“The job of the artist is always to deepen the mystery.”
— Francis Bacon