A guest essay by Franco Salmoiraghi

These images are selections from forty-five years of photographing in Hawai’i. Expeditions, wanderings and assignments for books and magazines have given me opportunities to observe the mysterious and mythical nature of the ‘aina (land) that has been revered for centuries through ritual oli, hula and mele (chant, dance and song).

These photographs are quiet observations. My intent has been to document remnants of primeval nature as well as areas occupied and cultivated by K?naka Maoli (native people of Hawai’i) and recent immigrants. Rather than focusing on majestic scenic views, I choose to depict the ordinary and the hidden. Sometimes my camera has led me into the unknown, toward nearly inaccessible places with historic references and spiritual links to the past. After many years, Hawai’i remains a place of formidable and subtle mystery for me.

I cannot make assumptions about what the ancient Hawaiian people saw and understood from their historic and mythic observations of these places. They developed exceptional abilities of perception and I seriously respect the sentient sensation of mana (supernatural or divine power) which infuses much of the landscape and places I have photographed.

How did the ancient people understand the rhythms of these isolated Islands through their practice of direct observation?

What did they see, and how did those perceptions motivate efforts and enhance their ability to survive upon arrival in a new and complex environment?

How did an ability to access unconscious memory and ancestral knowledge evolve and mold connections to nature and culture over centuries?

Many of these photographs are of an other Hawai’i, unfamiliar to most people. I have avoided the gloss of tourism, materialism and the cliché of palm trees, photographing in black and white to enhance observation of what may be seen in the untamed ground of reality.

I have searched for points of visual metamorphosis where beauty and meaning reside in the natural arrangement of things. Beauty is the surface matter of stuff. It attracts the eye and draws us closer. As a photographer, my concerns are with vision and how my perceptions of phenomena change as I photograph. Encounters with the natural world then lead toward a process of reading and deciphering metaphorical essence from the pictures. 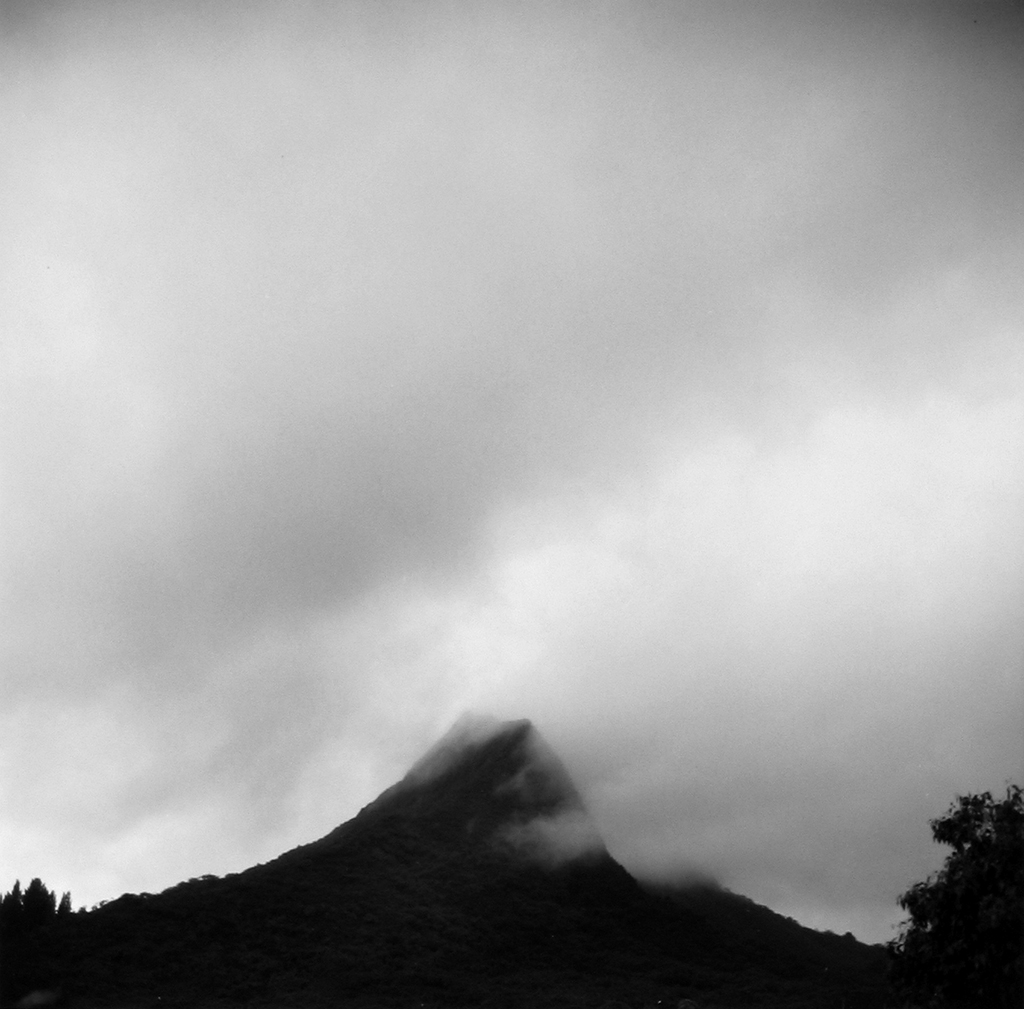 Meaning arises from the experiential process of photographing––being out and about in mysterious, mystical and suspenseful places in remote, desolate locations in the Islands. Some places are full of riddles and uncertainty. This may be disorienting––sometimes even dangerous. One can easily become lost, when actually close to a road or trail, due to the density of the rain forest and the vertiginous slope of valley walls. Some of this feeling of ambiguity which may arise in these places is related to local stories of mystery and mythology––even sorcery.

I have been fortunate to make my way home from intense experiences––finding myself on the side of a cliff with nowhere to go but down––and no way to get there. In these circumstances one can be overcome by confusion and fear. My concerns then are not about beauty and meaning, but survival. Those encounters have been effective in forcing me to observe nature intimately and intensely, while continuing to make photographs.

A latent sense of mystery in nature is manifested and amplified by familiar elements: Air, rain, sound, earth, fire and the light, mists and winds of the atmospheres that infuse the world. These features change suddenly. A rainstorm in the mountains creates flash floods. Things are washed away and never found. In an instant.

Anticipating and observing change, and attempting to understand the experience in the moment, can sometimes lead to incorrect interpretations. There may be obscure and incomprehensible signs and portents of mystery about to happen––and we may be overcome by feelings of those strong equivocal forces at work which confuse us. Nature is a powerful force. There are times when it can be creepy out there alone in the wilderness.

A point of convergence exists between seeing nothing and the awareness of a glimmer in the appearance of things. One must be prepared. Sometimes though, even when watching patiently, nothing is revealed. The world seems to stop. There are no impressions to be transformed into a photograph. Undefinable elements in the surroundings may continue to touch us unconsciously as we watch. This may lead to insight––seeing through the surface of things to the ground of being––when following a vision into uncharted territory. Watching and listening. I usually do not wait overly long for the light to be perfect before making a photograph. Observe and move on. There are other surroundings to be investigated. 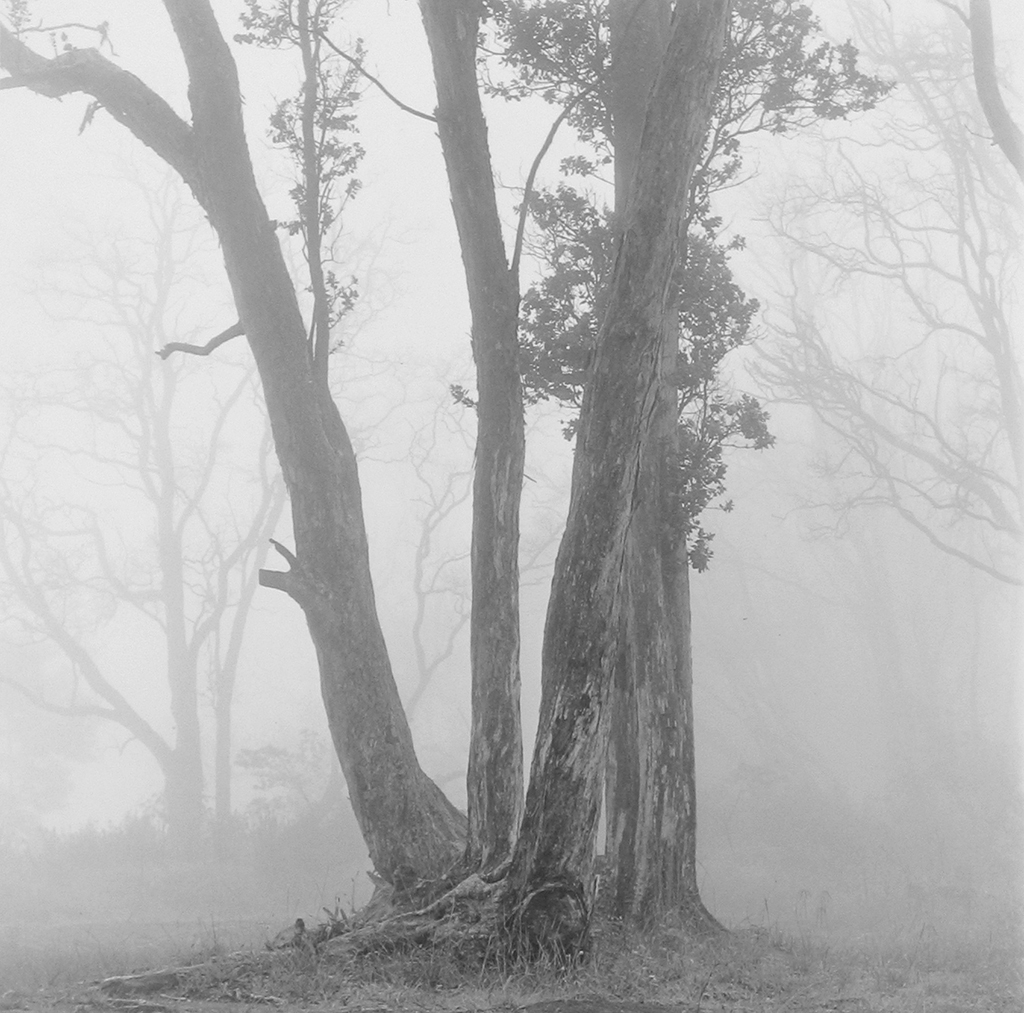 I am in the wilderness of Hawai’i Volcanoes National Park on the Island of Hawai’i. The mist is dense. Details of the landscape surrounding me are invisible. A blank field. Air moves, mists disperse, and a tree dances into the camera frame. The eye senses the possibility of a photograph being born. Simultaneously, I am aware of a presence beyond this surface layer of tree and forest––there is wood and food and shelter; fiber for clothing and compost; fuel for warmth and cooking; plants for healing; habitat for the critters. Alive or dead, the spirit of the forest remains useful and beautiful. Endurance and persistence allow us to be vigilant as conditions change, revealing or obscuring. Perhaps metaphors, riddles, or other cryptic visual messages will enter consciousness.

What do we see and understand when encountering nature, and what characterizes our cognition of phenomena?

What is the content of pictures that mutates to visual metaphor, intensifying our sense of the thing seen long after leaving a place––and what more may we see if we continue to observe the photographs over time?

Is there a latent residue, full of incomprehensible meanings, waiting to trigger the creation of personal mythologies, which become our stories, leading toward understanding and complex dreams?

Maps to navigate the unknown?

In looking, we may realize that there is more to understand than what was initially seen in any photograph. Levels of visual sediment are deposited which we interpret, absorb and peel away in myriad ways through an emotional sensitivity to the unknown over time.

Carl Jung believed, from his work with the unconscious, that “It is important to speak of incomprehensible things” and, “The unconscious helps by communicating things to us, or making figurative allusions.”  Jung goes on to say that: “Only through objective cognition is the real coniunctio possible.” He refers to the psychological union of opposites representing conscious and unconscious processes along with the birth of new possibilities and visions.

I am writing many years after my first photographic encounters with the landscape of Hawai’i in 1968. I see more significance and content in my pictures now than when they were first made. This enhances my access to the memory of experience. Much has changed  in myself and in the Islands. Some places, such as Kalapana, no longer exist––covered by lava flows or disappearing as a lava shelf has fragmented and plunged into the ocean.

Movement of water through mountain streams and ocean waves, as well as cataclysmic upheavals of earthquake, tsunami and volcanic eruption, have combined to radically transform the Island landscape. Immense change has also come from human habitation during the past thousand years, and even more intensely in the present era by aggressive commercialization of natural and cultural resources. This overuse of the land has caused more change than natural forces. I have seen this happen.

My experiences and observations in this landscape have given me many gifts. Studying my photographs today, a glimpse into the matrix of beauty and complexity is briefly opened for me. Someday, I may understand this mystery of persistent and intentional observation. And the possibility of photographing infinity.