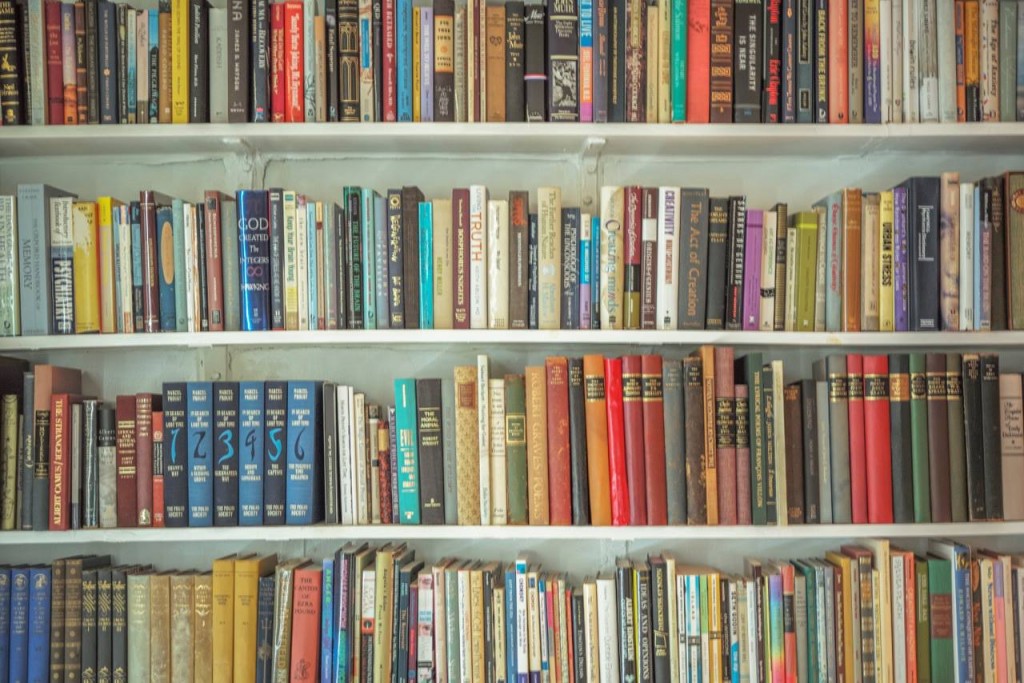 I recently visited my local library, for the first time since its expansion and renovation, during which it was transformed into an adequately sized, aesthetically pleasing space. However, I was disturbed to find there were few books on the shelves and even fewer people browsing. The books now only fill 25% of the available shelves. I was told by a staff member that the library has “room to grow.” Good… I guess. I remember the joyful chaos of the former space, filled with adults and children, and brimming over with books and the energy of people inquiring, learning, reading and looking. I liked it. It felt good. This current space feels formal and uninviting—with few literary discoveries for me to make. There are too few books.

Books are essential to our intellectual, moral, and spiritual development. They teach us about the past, about varying worldviews, and most importantly, they become a repository of what people have learned and discovered and suffered and overcome. In short, books hold our common cultural heritage, what we mustn’t forget and what we must use to build towards the discoveries that we will make in the future. If we become something now in our lives in whatever domain we are passionate about, it is partly because of those that we have learned from and grown from, and who left their legacy behind in the shape of books.

In doing research the other day, I went to our main branch in downtown Honolulu and was pleasantly surprised how full of books the building seemed, and disappointed that merely one of the eight volumes I sought to peruse were anywhere in the system at all. I was egoistically disappointed that my book—penned by a local author and teacher who’s made many contributions to this community—wasn’t available anywhere in the state system.

To add further insult, the nearest large bookstore, a Barnes and Noble at the local mall, a haven for the literati of Honolulu, will be closing with its space turned into a Ross store. Do we really need more discount clothing outlets? I guess so. You can’t wear a book. With B&N closing, Honolulu, a community of nearly one million people will have only one large bookstore left. Books are clearly losing value for some in our quick look, techno-obsessed,  wired society.

Where do we turn without books? The internet? Marvelous as the web can be, a web site cannot hold the depth and richness, the expansive range and complex arguments of a 200-700 page book. I once heard the world wide web likened to the North Platte River, a mile wide and an inch deep. We need to pay active attention to read a book. We can view the web while multi-tasking and cannot possibly be challenged to think and feel as we can within the pages of a well-conceived and executed book.

What is gained from books? Works of philosophy raise the great unanswerable questions that lend meaning to our lives. Books of biography and history give us intimate or sweeping views of the past. Poetry gives music and metaphor, and helps us live with paradox, uncertainty, and ambiguity, becoming intimate with the unknown. Memoirs can inspire and teach. Novels can transport us into lives we’ve never lived, teach us empathy and compassion, help us stand in another’s shoes, and offer great moral insight.

Gregory Currie writes in the New York Times: “The narrative form gives literary fiction a peculiar power to generate moral insight; in the hands of a literary master like Henry James, fiction is able to give us scenarios that make vivid the details of a moral issue, while allowing us to think them through without the distortions wrought by personal interest.

One reason people… have argued for the benefits of literature is that literature, or fictional narrative of real quality, deals in complexity. Literature turns us away from the simple moral rules that so often prove unhelpful when we are confronted with messy real-life decision making, and gets us ready for the stormy voyage through the social world that sensitive, discriminating moral agents are supposed to undertake.”

I’ve heard media pundits speak of our post-literate culture, where media and movies take the place of books for our intellectual development. Huh? Have you seen most movies? In spite of the fact there are films of real quality and substance, that thought is incredibly sad and the more I think about it, downright scary.

Show me the depth, complexity, sweep and subtle grandeur in the movies of such classics as War and Peace or the Mahabharata, India’s epic poem. We accuse books and literature of being the domain of the capitalist, cultural elite. Well yes . . . so? Intelligence is not governed by or limited by class or culture. There are many forms of literature, befitting multiple perspectives. Epic poems such as Gilgamesh, which comprise the literature of pre-literate societies, were remembered and transmitted by itinerant storytellers, begging for a living, whose powers of memorization and concentration were astounding, remembering the contents of sweeping stories, word for word, line by line.

Books are for grown-up minds and help grow our minds. They ameliorate the quickened pace and shortened attention spans of modern existence. Yet many books today are thin, lacking in depth and substance, appealing to newspaper readership, a sixth grade mentality. Sometimes I wonder whether the classics of literature or many great books would stand a chance of being published today. Would relatively unknown authors such as Walt Whitman and Henry David Thoreau have the kind of platform that publishers currently require? Could a strange beatnik named Jack Kerouac find an agent if he began writing in this century?

Communities need to support their libraries with adequate budgets and sufficient staffing. Ebook publishers need to work out methods of sharing and lending books for the many who love to read and cannot afford to purchase books. This means you Apple whose current iBooks cannot be lent resulting in more revenues for the company and less books for students, retired folks and the masses. Books cannot be treated as mere commodities or entertainment. Vendors need to take a stand and view books as the perpetuation of what we as a people have experienced and discovered and need to pass down to coming generations. And we all need to support our local independent bookstores, hell any bookstore, to prevent the on-line behemoths from taking over and creating an unhealthy monopoly. On-line purchasing is great but does nothing to support our local economy or promote our local authors.

Let’s work to keep our love of books alive and spend our money and time where it matters.

“Books are to be call’d for, and supplied, on the assumption that the process of reading is not a half sleep, but, in highest sense, an exercise, a gymnast’s struggle; that the reader is to do something for himself, must be on the alert, must himself or herself construct indeed the poem, argument, history, metaphysical essay — the text furnishing the hints, the clue, the start or frame-work.”