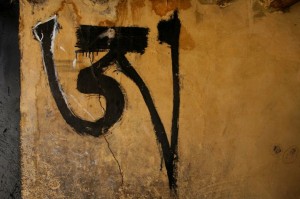 A while back I quit teaching yoga. I took a sabbatical for one year. The decision to stop was not made hastily or without foresight. It was a long time coming. The reason I quit was due to my ambivalence about what it means to be a real teacher. Being a teacher in the postmodern world presents us with problems we don’t yet have solutions for.

I am not a spiritual teacher by any stretch of the imagination, but I do try to integrate yoga philosophy and yoga practice in my work with students. I know that a teacher of yoga is, first and foremost, a student and practitioner who hopes to share knowledge and experience with other seekers.

There are two major ways in which yoga in the postmodern world misses the mark. First, postmodernity, as beneficial as it has been to our intellectual, economic, and cultural growth, has confounded our spiritual growth. Second, entrepreneurship and yoga are like oil and water. No matter how hard you shake it, the two just don’t mix. Both postmodern paradigms and modern capitalism have confused the structure of spiritual study, tutelage, and discipleship. The psychological implications of such confusion almost ensure that the seeker will not find what he or she is looking for. While these statements may seem grave and pessimistic, it’s not the end of road for Western practitioners. It simply means that Western teachers and students must be clear about their intentions, so that they may make decisions about why they study, where they study and who they study with. Such a shift in thinking would radically change the face of Western yoga, or any type of postmodern spiritual practice.

A teacher-student relationship is a sacred one. Inherent in that relationship is hierarchy. Yet we don’t like hierarchies in the postmodern world—we like equality and the luxuries it affords. Women should hold the same professional status as men, and all races should be considered equally when applying for a job. Such non-hierarchical paradigms do not hold up as well in the spiritual community. In traditional Asian spiritual communities hierarchies are key in defining the teacher-student relationship. Generally, monks in traditional communities join their respective orders from a very young age and commit years of their life to uninterrupted study. They do not have jobs, or the responsibilities of householders. Their lives are completely saturated in their chosen practice, whether it is the dharma, yoga, or meditation.

Western yoga teachers, for example, usually make money off their teaching. Most teachers today enroll in 200-hour teacher training courses before being thrust out into the world with the title “teacher.” Already ambivalent about the concepts of hierarchies and inequality, we see our teachers as equals in many regards. Perhaps our teachers seem more peaceful or more flexible, but all in all, we wouldn’t say that our Western teachers are any more enlightened than we are.

Zen teacher, Genpo Roshi, talks about this in an interview with Andrew Cohen for EnlightenNext magazine. Both Roshi and Cohen agree that once a student becomes a personal friend, the student’s enlightenment is threatened as the teacher-student hierarchical relationship is diminished. Genpo Roshi uses the example of a faucet and a cup to describe the ideal student-teacher interaction. He says that if our intent as students is to fill our cup, we must literally “stand under” the faucet of the teacher, thus explicating the nature of the student hierarchy. The postmodern student’s discomfort with “standing under” leads to a situation where the cup of learning is brought along side the faucet, unable to receive knowledge.

Postmodernity, making all people equal, also makes it necessary for spiritual teachers to possess an income, which is unheard of in most traditional societies. In a traditional monastic or yogic setting, such teachers are supported by the society they live in. This makes the role of the spiritual teacher very clear and undiluted. Most teachers today run yoga studios, dharma centers, or retreat centers in an attempt to fuse together their practice and their livelihood. In and of itself such an endeavor is not a negative one. Yet, the need for security and income complicates the role of the postmodern teacher. Teaching can become an ego-affirming occupation. When concerned for his own security, a teacher may submit to premature and inauthentic displays of spirituality in order to gain and keep students and followers. Spirituality and enlightenment is no longer an end unto itself. Instead, teaching yoga or teaching the dharma becomes means by which to glorify the teacher and has very little to do with the student’s path towards liberation. One of the negative implications of glorifying the ego is that the teacher no longer remains a student. When spirituality becomes entangled with the need to make a living it could potentially drain both the student and the teacher, contributing to feelings of powerlessness on behalf of the student, and power and control issues on behalf of the teacher.

Mixing business and spirituality does not always have to end with students and teacher feeling drained and exploited. If the teachings are to remain true, teachers, then, need to be evermore vigilant of their intentions. Teachers must maintain integrity at all times by making sure they are committed to their physical practices, ethical practices, and self-study in order to keep their center during times of economic hardship and during times of affluence.

I have felt my own survival needs interfering with my ability to teach, learn, and transmit knowledge appropriately. I have also seen such needs complicate the lives of my own teachers and mentors. I have not yet found a solution that will allow me to maintain my position as “teacher”, which is why I decided to trim the fat off my teaching until I could realign myself with what’s honest.

I began teaching again, only to face the same struggles and issues I did several years ago. Perhaps it is unrealistic to expect that postmodern society alter itself to fit the paradigms of traditional societies in the past. Maybe this era’s biggest teaching is learning how to balance the material with the spiritual, so as not to confuse livelihood with liberation.