A Conversation with Jacob Needleman 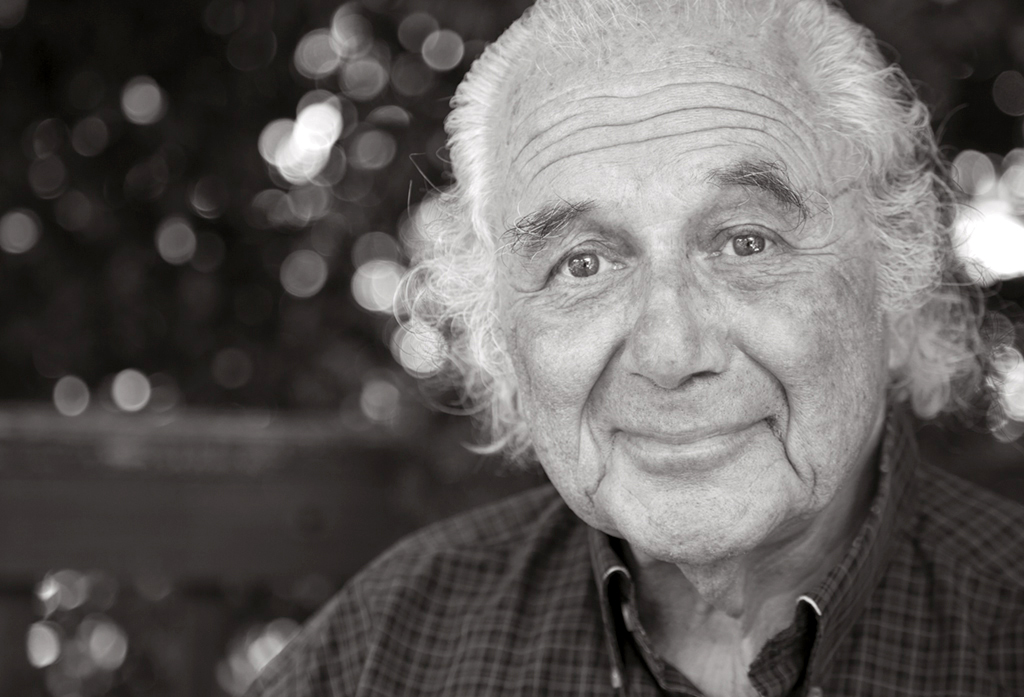 What is the role of the philosopher in today’s world? We have an ever increasing need for someone to remind us of the important questions that call us, to renew the search for a deeper form of knowing amidst a cacophony of voices and a consumer culture addicted to superficial experience—to approach the great unanswerable questions that give dimension and hope and meaning to our lives. Jacob Needleman is such a philosopher. The Chicago Tribune has called him, “an immensely learned man who is unembarrassed by the big questions that many of his fellow philosophers prefer to dodge.”

I recently interviewed Dr. Needleman for a book that I’m working on: Gathering Together: Conversations on Collective Wisdom. Our interchange was rich and enlivening. Unlike others I have interviewed, “authorities” in various fields, I deeply appreciated how Dr. Needleman served to open the question, expand the inquiry with his prodigious knowledge and obviously rich experience. He did not “answer” many of the questions in the usual sense. His responses reminded me of Rilke quote: “Try to love the questions themselves. Live the questions now. Perhaps you will then gradually, without noticing it, live along some distant day into the answer.”

My perception of Dr. Needleman, which grew and deepened during the interview, brought to mind the archetype of the “Wise man.” I felt that I was conversing with one who has not shirked from the most difficult questions, who has sought the essential dimensions behind the experiences of our lives, and who, as Rilke suggested, has endeavored to live the question and speak from the well of his own experience. An impression that touched me during the interview was how the brilliance of his philosopher’s mind was blended with a genuine, engaged feeling for the topics we discussed.

I have trying to interview Dr. Needleman for a while now. We attempted to connect several times, and for one good reason or another, our meeting got scheduled and then rescheduled. I was embarking on a multi-city trip and Dr. Needleman had an opening, so we arranged a meeting. I flew into Oakland late the night before and stayed in an airport hotel. We met mid-morning the next day. The preparations for a trip and flying from Hawaii to the West Coast had left me in a state of fragmentation and stress. Yet I wanted to be present for the interview. When I arrived at Dr. Needleman’s house in Oakland, I could witness with some clarity and feel with some poignancy my state of inattention and disbursed energies. Dr. Needleman invited me to the back porch amidst the trees and birds of a semi-wooded suburban neighborhood.

What struck me immediately was his silence and presence, an expansive silence that felt in contrast to my restless energies. With the first question, he listened, really listened, and maintained a period of quiet, going into himself to find an answer. There were moments of deep silence as he collected his thoughts, and I literally attempted to collect my fragmented energies. I could see myself with heightened clarity due to his inner attention. I saw and felt an image of myself as a racehorse, wanting to proceed, to get on to the next question and answer. Thanks to his silence, something quieted down in me, leading to a growing presence of mind and feeling on my part.

A quote from his new book about his childhood friend Elias reverberated in me and mirrored my own experience: “He is … powerfully silent as usual. But this time it is very clear that his silence is feeding me. I can feel it in my own body.”

When philosophy and experience blend and synthesize, we find genuine wisdom. Probably the most compelling aspect of Dr. Needleman’s ideas is that you know, you feel deep within the self, even within one’s body, that he strives to live them. For Needleman, ideas are not mere mental concepts, but they represent a force that has the capacity to penetrate and inform our experience and touch our very being.

The following are excerpts from the interview that relate to my questions about the great potential and the need for coming together—and what can grow from that striving:

“The bridge between what I ought to be and what I am is so vast. There is such a gap. All the moralizing books, some of them very profound, only show us that we can’t do it. But this is one thing, one little plank in that bridge that we can do. Man can listen. He cannot do, but he can listen. And listening is the first work of love. When we’re listening to each other love begins.”

“But the listening that we are talking about is that I sacrifice. For a moment, I set myself free from the fear of not having a smart reply. I let go of the impulse that I’ve got to assert myself.  Or—and this is very important to what you’re talking about—I try to set myself free from the attachment or identification with my own opinion. Plato taught that. Socrates taught that the first freedom is freedom from opinion.”

“We come together for many reasons—practical, pragmatic, etc, etc—which is part of the question of collective intelligence, but fundamentally, it is for virtue. Now the word “happiness” is used in the founding documents, and throughout America—“The pursuit of happiness.” But if you just peel a layer, one single layer off the word happiness, you find the word “virtue.” And, Jefferson, for example, and others claim there’s no happiness without virtue. Happiness as mere pleasure is the deterioration of the idea; that is another toxic idea that has infected maybe all of mankind, not just modern culture. Pleasure is one thing. Happiness can be understood as something deeper. And when it is, it’s virtue. It was Plato’s idea that only a just man is truly happy. It’s at the heart of The Republic, it’s the heart of Plato’s thought, and it’s at the heart of the founding fathers. What they meant by virtue, I don’t know—but I don’t think it was just a kind of socially conditioned, super ego virtue. I think it was something deeper in human nature that they had an intuition about. So, to come together with the aim of searching for the voice of conscience in your actions, in your life, and in the founding of your society—this to me is the heart of America.”

“What is up to the individual, in order that he or she allow, permit, a Baraka—the energy—to pass through into the community? The teacher, the master is physically gone, but the energy is there. And one knows it in the Gurdjieff work when people come together in a work condition, in a community. A certain silence can appear that is of immense force. And this will take our whole discussion to the meaning of silence. It’ll be a big discussion. It’s in silence that the truth really can appear, but it’s in speaking partly that it can be conveyed. Silence by itself is not enough, unless it leads to exchanges of a certain kind, which can take place also in silence, but one can be naïve about silence, just like they’re naïve about articulateness.” 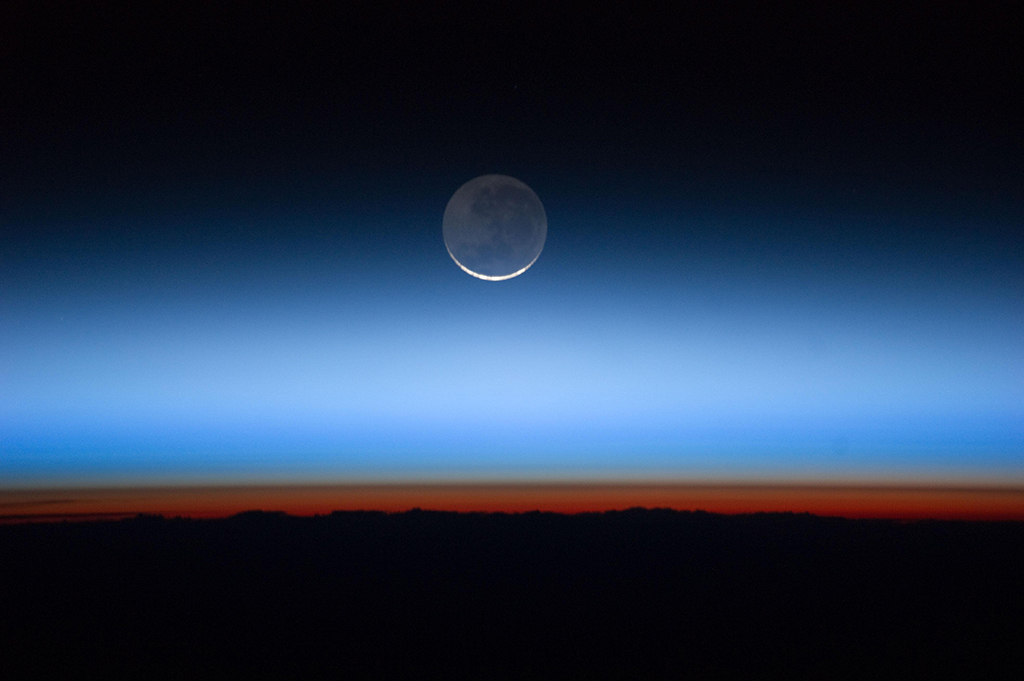 The levels of Earth’s atmosphere as viewed from the International Space Station, July 31, 2011.

“Alright, what would it take for the earth for this creature that has been put on earth, “man”—what would be needed from man in order for that tipping point to go the other way? Maybe a relatively small number of people need to “wake up,” to have a quality of consciousness that could transmit to the earth that energy that it desperately needs. You can almost hear the earth praying, breathing the same air we breathe, exhaling, praying, praying that man will become Man. And that could make a big difference. So even one act—one act of genuine love is qualitatively greater than a thousand of the other things that we think we’re going to do, that will get moralized and all the rest of it. That kind of energy passing between people and through that into the earth itself, through the air, who knows…” 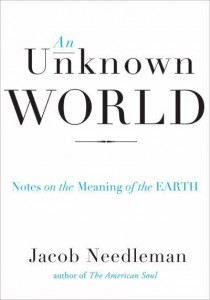 I just eagerly unwrapped Dr. Needleman’s newest book, An Unknown World: Notes on the Meaning of the Earth. It has a clean, elegant white cover with black and light blue typography, without the usual slick graphics and marketing hype. There is no preface, no introduction; none of the “bon-ton” literary forms that lead us slowly and gently into the author’s world. As I read it, many quotes strike me that expand on the content we touched on during the interview, such as these:

“My feeling for the earth, and … for the sun, was not psychological. It was metaphysical, ‘energetical.’ Such feelings are quite prior to, earlier than, feelings for one’s mother or father. They are written into the being of man. One could say they exist in us even before we are born. …These connections to the universe—we could speak of it, very cautiously, as God—are in our essence, our blood, not merely in the conditioned personality that is forged from external cultural influences or parental actions.”

“We may say that the Earth itself will be a new Earth when human beings see her, hear her, taste her with the conscious attention that only human beings can bring to her. Such attention is not the pale, powerless, thin witnessing that the word “attention” often denotes. Conscious attention is a force that, if only for a moment, lifts the being of whatever or whomever it touches. The great secret of what the Earth needs from us is here.

“We are children of the Earth. What is it about the Earth that brought us forth? That brought forth man with his human consciousness? How could we possibly turn away from that obvious question, so blindingly obvious that it is a wonder of the world that we haven’t made it the heart and center of all our study of the planet—including our sub-atomic particles and metals and bacteria and mountains and climate and …”

“What is Man? Can we say that we are that specific two-natured being, like none other on Earth, meant to live both fully engaged in the forces of human life on Earth and fully engaged in keen obedience to that undiscovered immortal energy within ourselves which we are called to offer that groaning world that is our Earth?”

This book is about you and me—our great potential and where we fall— and about the earth, what it needs from us, what it is “praying that man will become.” Even though I have barely finished the book, I want to say: Humanity, Read this book! Please . . .